In the Winter 2020 edition of Horizons, Hospice & Community Care shared the story of its founding in 1980 as then Hospice of Lancaster County. The article highlighted how the Reverend Donald C. Wilson, pastor of the First Presbyterian Church in Lancaster, spearheaded the conversation about end-of-life care in the community, through a series of articles entitled “Terminal Candor” that were published in the Intelligencer Journal. Thanks to Reverend Wilson and others in the community, including physicians, clergy, and local social service organizations, Hospice of Lancaster County was born.

This edition of Horizons is building upon Hospice & Community Care’s founding and focusing on how it became a trusted organization in the community through the insights, drive and passion of three individuals —Paul Irion, Mary Graner and Jack Robinson—who were instrumental in establishing the organization to leave its mark on the community for the next 40 years.

From the comfort of his home at Willow Valley Communities, 97-year-old Paul Irion shares how he helped carry on his friend Reverend Donald Wilson’s vision of a hospice for Lancaster County. Paul had the opportunity to tell Reverend Wilson at his hospital bedside that a Hospice program was coming to reality. Paul was a hospital chaplain, professor of death and dying at the Lancaster Theological Seminary, and served as chairman of the community steering committee and planning committee to establish a hospice program in Lancaster. In 1980, after the creation of Hospice of Lancaster County, he served as Chairman of the Board and remained active for several years.

Through personal experience while caring for her father-in-law, Mary Graner became passionate about end of life. She saw her father-in-law struggling with pain and lack of treatment options, and knew there had to be a better way for people to live with a serious illness. Mary began as a volunteer with the organization in 1980 which quickly expanded into a life-long and impressive career. Mary became the executive director of Hospice of Lancaster County in 1983, and retired in 2008 following numerous accomplishments. Mary led the organization through challenging beginnings, tremendous growth, and expansion of the hospice program to include building the first free-standing hospice inpatient center in Pennsylvania which opened in 1996.

An attorney with Blakinger Thomas, Jack Robinson served, alongside Paul, on the community planning committee after having been asked to create bylaws for the fledgling organization. Jack served early on with the Hospice of Lancaster County Board of Directors as Vice Chair and later as Chair, and was further instrumental in helping the organization to secure its incorporation and nonprofit or 501(c)3 status. Jack was also at the forefront of working with Hospice leadership to secure Medicare certification in 1985. 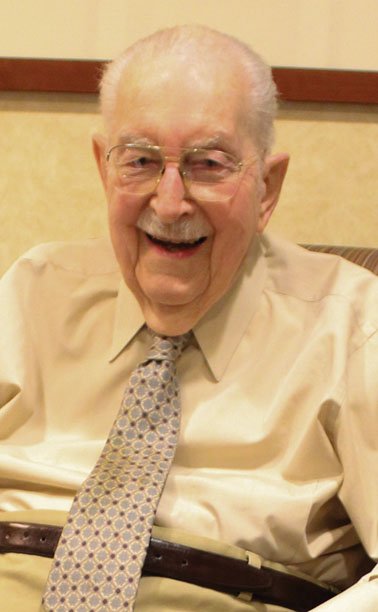 Q: How did you help then Hospice of Lancaster County build the community’s trust in the beginning?
A: (Paul) – In the beginning people had a lot of misconceptions about hospice care. They thought it was a way of hastening death and that it was giving up hope. They also were concerned that patients would become addicted to the medications that hospice programs administered at that time, and they were uncertain about having their loved ones cared for in the home.

It was a grassroots effort from the beginning. I spoke to community groups, such as the local hospital council, medical society, churches and service clubs, to help change their way of thinking. It also took some time to persuade healthcare providers about the organization because they questioned the way hospice programs dealt with end-of-life issues. It took one day at a time and one patient a time.

Q: What were some of the biggest challenges and opportunities with maintaining a hospice program in Lancaster County?
A: (Paul) – Developing the community’s support in the beginning took a lot of work; funding was also a challenge including finding enough money to make payroll.

Early on Hospice of Lancaster County received funding from the three local hospitals and the American Cancer Society. During that time, friends of Reverend Wilson also donated $15,000 to the organization in his honor. The organization needed $20,000 before opening for business, and thanks to the generosity of Reverend Wilson’s friends and others the organization reached its goal. Those funds also helped to create the Donald C. Wilson Endowment Fund that is still in existence today and provides Hospice & Community Care with a strong foundation for its future.

I remember the husband of one of Hospice’s first patients, who wanted to remain anonymous, brought to the office their AT&T bank shares to help bail out the organization so it could make payroll, which happened twice. The organization also needed to hire people in order to be eligible for Medicare status and, thanks to the generosity of the Steinman Foundation, the organization received funding to help cover the cost of staff. In its first full year of operation the organization cared for 45 patients with two staff members and six volunteers.

These are some of my fondest memories – seeing the community come together.

A: (Mary) – I looked at every challenge as an opportunity. Funding was definitely a challenge, as was becoming Medicare-certified, acquiring state licensure, and managing overall growth.

There was so much that the organization wanted to do in the beginning and it was starting to grow rapidly, however, Hospice of Lancaster County needed to become Medicare-certified in order to maintain and manage that growth. Becoming certified was the gateway for getting other insurance companies to understand what hospices did in the ‘80s. At the time, many of the organization’s patients were not of Medicare age and their private insurances would not cover hospice care. The organization received its Medicare status in 1985.

The organization’s leadership began to network with other programs across the state who were evolving and advocated together for hospice licensure in Pennsylvania as it was one of the few states at the time that did not have this. The organization continued its advocacy work when it was opening its inpatient center on Good Drive. The state required Hospice to secure nursing home licensure and hire a nursing home administrator because legislators and the Department of Health were still uncertain about hospice programs. I, along with others, worked directly with state legislators to define what the organization was doing, demonstrate the importance of end-of-life care, and help author the needed regulation. Hospice & Community Care received hospice licensure in 1998.

For Hospice of Lancaster County to continue its growth, it also relied on community support. The organization opened its first office in the United Way building on Janet Avenue in Lancaster with only a table and chair, then moved to Fountain Avenue in 1984, after outgrowing the space at United Way. Hospice was so fortunate to have many businesses supply the organization with affordable space, furnishings and office supplies to become operational. From there, it moved to Airport Road in 1989, and then opened The Essa Flory Hospice Center on Good Drive in 1996.

The organization had a forward-thinking Board of Directors who weren’t afraid to take risks, which helped position Hospice for success. I can remember when the AIDS crisis was happening and there was a lot of controversy and unknowns, but Hospice of Lancaster County’s staff continued to see patients and support families without hesitation. Such is the case with what is happening now in the community with COVID-19.

Q: What is your hope for Hospice & Community Care 40 years from now?
A: (Mary) – My hope is that the organization never loses sight of the foundation upon which it was built, and continues to design care and services around people rather than solely around the regulations. I also hope that it continues to learn and grow from its beginnings, to be readily able to adapt to community needs, and to always provide exceptional hospice care wherever it may go in the future.

A: (Jack) – I hope that in 40 years, Hospice & Community Care will still continue to strive to put patients and their families at the center of the end-of-life care that it provides, and that it can continue to avoid the institutionalization that has affected so many health care organizations in our country.

Forty-years later the organization still relies on the support of the community and its extraordinary, talented employees. Thank you to Paul, Mary, Jack and the many others who helped create a lasting legacy and build a solid foundation for Hospice & Community Care.

Please watch for our summer edition of Horizons to learn how care for patients and families has evolved over the last 40 years.